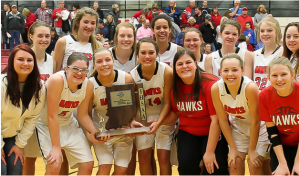 Hamilton County Reporter | February 15, 2015| Posted by: Richie Hall
With history in its sight, the Sheridan girls basketball team sprinted to the finish line.

The Blackhawks broke out of a tough sectional championship game with Elwood late in the third quarter, then powered through the fourth period to beat the Panthers 67-52 to win the Class 2A Taylor Sectional on Saturday night. In front of a huge Sheridan crowd, the Blackhawks won the school’s first ever girls basketball sectional title.

“I am so thrilled for this group of kids, and particularly this senior group,” said Sheridan coach Jeff Guenther, who got his 100th win as the Blackhawks’ coach with the Saturday victory. “We’ve had some good groups and some good kids come through, but this senior group has really, really bought into everything that we’re about. And they have been unbelievable leaders, and I told them the other day ‘You know, life is not always fair.’ This week, it was. They deserved this.”

As the clock ran out, Sheridan’s emotions came out as well.

“I’m glad that we could do it with each other, because I love Rebekah (Hopper) and Katie (Hybarger) more than anything,” said Peyton Fleener, one of the seniors on the Sheridan squad. They each had their own words to describe the feeling of winning – “Amazing,” said Fleener; “unbelievable,” said Hybarger and “awesome,” said Hopper. On this night, they all meant the same thing.

Elwood made Sheridan work for that long-awaited trophy, especially in the first three quarters. The Panthers recovered from an early 10-6 Blackhawk lead to jump ahead by as much as 21-16 in the beginning of the second period.

Elwood was still ahead 27-23 around the halfway point of the quarter. Sheridan responded with a 3-pointer from Brittany Welch, and Audrey Reed gave the ‘Hawks a 28-27 lead with a layin. With the score tied at 30-30, Welch got another basket in the final minute, and that gave Sheridan a 32-30 halftime lead.

The third quarter was a breathtaking display of baskets under pressure – it seemed like neither team could miss. Elwood made three 3-pointers during the first four minutes of the period, and a layin around the midway point gave the Tigers a 45-42 lead.

But a sudden 7-0 run put the ‘Hawks in charge. Payton Buckner hit one of her trademark clutch 3-pointers to tie the game, then Hybarger made a layin. Reed added a jump shot, and just like that Sheridan was ahead 49-45.

“I think it helped playing the two most difficult teams beside us early in the tournament, because it only helped us prepare for Elwood,” said Hybarger. “They got us more psyched to win this final game, and that’s what we did.”

Sheridan made sure there was no dramatic comeback: After getting the ball back, the ‘Hawks worked the clock down to around the 1:05 mark, and Reed scored the final basket of the game. Sheridan held Elwood scoreless for the final 2:49.

“We had to put all of our heart into it,” said Welch. “That’s the only way we were going to come out with it. Everyone had to come out and do what we do best, which is work together.”

Sheridan is now 20-6, and plays Fountain Central in the first game of the Lapel Regional next Saturday.

“I’ve never been so happy to practice five days in a row,” said Hybarger. “Ever.”